Cows scanned pregnant carrying twins can often mummify one of the calves and a single calf can be born. 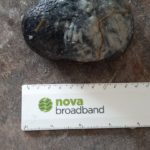 Smart scan previously identified that this animal was carrying twins at a later stage of pregnant beyond the stage where foetal gender could be determined. A single ever calve was born and this mummified calf was born co twin. The heifer calf born may be either a free martin or infertile. This depends on whether the mummified foetus was a male or female. In conjunction with a male the female would be infertile because of a condition called anastomosis which is the fusion of the afterbirth of the male to the female’s afterbirth whereby blood vessels fuse and testosterone travels across into the female and prevents normal development of the reproductive tract. It is also worth noting that males form co twins to females are sub fertile as stock bulls.

"We use Reprodoc  to oversee the reproductive arrangement of our dairy herd to maintain a compact calving programme from mid February through to the beginning of May.  We use scanning to identify cows not suitable for breeding, the management of late calving cows, identification of cows with early embryonic death and to identify cows where heats have been missed during the AI programme. It is a great service.
John King
NewCastleWest, Co. Limerick